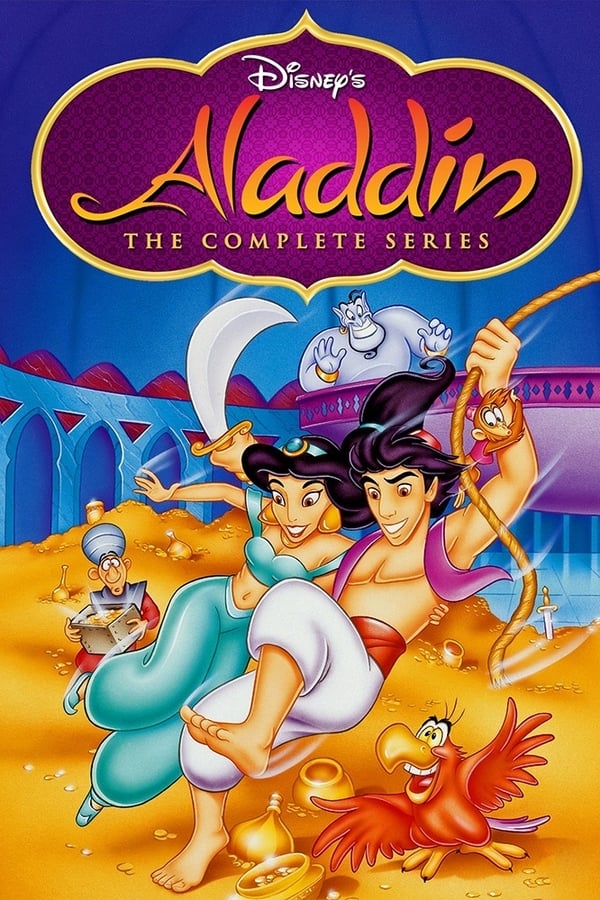 Aladdin is an animated television series made by Walt Disney Television which aired from 1994 to 1995, based on the original 1992 feature. It was animated at the Slightly Offbeat Productions Studios in Penrose, Auckland, New Zealand. Coming on the heels of the direct-to-video sequel The Return of Jafar, the series picked up where that installment left off, with Aladdin now living in the palace, engaged to beautiful and spunky Princess Jasmine. “Al” and Jasmine went together into peril among sorcerers, monsters, thieves, and more. Monkey sidekick Abu, the animated Magic Carpet, and the fast-talking, shape-shifting Genie came along to help, as did sassy, complaining parrot Iago, formerly Jafar’s pet but now an antihero. Jafar, having previously been destroyed in the second movie, returns in only one episode which also serves as a crossover with Hercules: The Animated Series. Many of the films’ stars provided the voices of their TV counterparts, with the notable exception of Dan Castellaneta filling in for Robin Williams in the Genie role. Unlike The Little Mermaid spinoff series, this series does not feature any musical numbers. The series originally aired concurrently on the syndicated The Disney Afternoon block and on Saturday mornings on CBS. Disney Channel reran the series in the late-1990s until it was replaced by their pre-teen lineup. The show was later shown on Toon Disney, but has since been removed.